Disclosure of the exit strategy by FEDChairman Ben Bernanke in May 2013 triggered a new period marked by a change in the risk perception towards developing economies in financial markets. Turkey entered this period with a high current accounts deficit, a production sector substantially dependent on imports and three successive elections.

The high level of forex debt burden and the import dependence make the corporate sector vulnerable to volatility in ex-change rates and slowdown in domestic demand. In 2014, companies were able to resist to the sharp depreciation of the lira at the beginning of the year by sacrificing partly their profits.

The sharp rises in exchange rates, which started in December 2013, stabilized only after the Central Bank sharply reduced interest rates at the end of January. However, these rises in exchange rates continue negatively affecting company balance sheets. On the other hand, the credit re-striction measures introduced by Banking Regulation and Supervision Agency (BRSA) at the beginning of the year to contain the current accounts deficit have slowed down domestic demand, which was among the factors that made it difficult for companies to collect their receivables.

In line with these developments, impairments were started to be observed in the payment capacities of sectors with produc-tion and sales concentrated predominantly on the domestic market. The rises in both protested bills and bad checks confirm this impairment. Bad checks amounted to 15.9 billon TL in the first 10 months of 2014, up by 5.4%. The amount of protested bills also rose by 9.1% y-o-y in the first ten months of 2014, due to rising interests and slowing domestic demand.

Given that the level of exchange rates and domestic demand are two key factors affecting the profitability of companies in Turkey, a moderate recovery in domestic demand in the first quarter of 2015 may positively affect profitability of companies. However, developments in the global economy, geopolitical risks, the expected process of interest rate hike by FED and the upcoming general elections in Turkey signal the persistence of exchange rate risk. This suggests that we are entering a period when companies must manage their cash flows and borrowing much more consciously. Coface highlights the risks in construction and non-iron and metal sec-tors in particular. 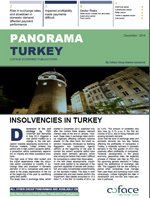