Victims of sluggish growth, businesses in Central Europe will not emerge from the crisis in 2013

Compared to Western Europe, defaults in Eastern Europe are accelerating at a very high rate 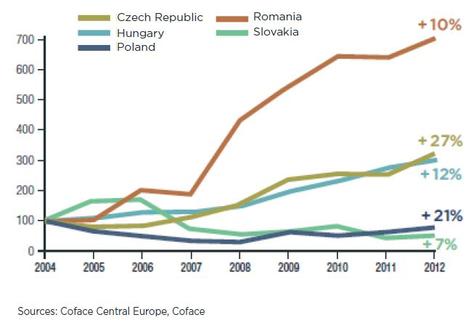 After the 2009 recession and in the context of the crisis in the euro zone, Central European companies are very vulnerable, according to data collected by Coface on the ground. Insolvencies rose sharply in nearly all of the countries in this region, and in much larger proportions than in Western Europe, from +7% in Slovakia to +27% in the Czech Republic in 2012.

The highest concentration of insolvencies was observed in construction (30% of the total) as a result of a gradual decline in production, and in retail (23%) due to intense competition and the loss of consumer confidence.

Although most of the insolvencies in Central Europe, as in Western Europe, concern small and mediumsized businesses and particularly microenterprises, the major players have also been affected.

The contraction of domestic demand, the main cause of insolvencies in Poland and Romania

An analysis by Coface economists shows that the factors which explain this worrying increase in insolvencies is not solely attributable to the slowdown in West European countries, their principal commercial partners.

The entry into force of new legislation in 2004 concerning insolvency1 procedures, has led to a significant increase in requests to declare bankruptcy2, particularly in Romania and Hungary.

By contrast, in Poland and Slovakia, only a small number of companies, mostly large organisations, are requesting the long and costly reorganisation procedures, while small companies simply cease their operations. In short, depending on the case, legal reform may play a role in the insolvencies, but it is not the only explanation.

Based on statistical studies which take into account private domestic demand (consumption and investment), exports and credit developments, Coface has distinguished two particular cases. Poland, which has the largest domestic market in Central Europe, where domestic demand,exports and slowing credit are correlated with the increase in insolvencies. And Romania, where only the weight of household consumption (72% of GDP) can significantly explain this increase.

For 2013, considering the statistical study conducted for this Panorama, Coface expects continued upward movement of insolvencies in Central Europe. In Romania, the increase will follow the same rate of +10% in 2012, due to a low increase in domestic consumption (+1.2%). In Poland, because of weak increases in exports (+2%) and domestic demand (+0.9%), insolvencies will increase significantly by +29%.

In Slovakia, where the growth rate does not appear to be sustainable, and in the Czech Republic, due to the contraction in its exports, insolvencies should increase at the same rate as in 2012. In connection with the fragility of the banking system, companies in Slovenia are likely to be the most affected by insolvencies in the region.

1 Insolvency: an insolvent company is no longer able to cope with its debts. This term may refer to a procedure

2 Bankruptcy: depending on the country, this term may refer to a standard court reorganisation procedure or liquidation