Germany: More insolvencies in the pipeline

It is not news that insolvencies in Germany dropped significantly by 15.5% in 2020 compared to 2019, although 2020 was marked by the strongest recession in Germany since 2009. Public support programmes, such as loans (which supported around 120,000 companies), state-backed loan-guarantees (for 13 companies) and subsidies around the first lockdown in spring (for 1,775,000 companies) and later on (for 1,838,000 companies) prevented many insolvencies. Furlough schemes were implemented and, during the peak in April 2020, helped 609,681 companies and 5,995,428 employees (or 18% of the labour force). An additional economic support package and changes in the law further helped to prevent insolvencies from happening in 2020.

However, while this is true for the economy overall, not every sector or region could benefit from this development. Indeed, the metals and automotive sectors recorded increases in their insolvencies compared to 2019, by 7% and 32%, respectively. Furthermore, the regional situation was also heterogeneous. While 15 states announced decreasing insolvencies, Bremen stood out as an exception, with an increase of 8.1% compared to 2019. Hesse, Baden-Wuerttemberg and Lower Saxony reported relatively low insolvency decreases too compared to the average. Besides, the year 2020 perfectly displayed that while the numbers of insolvencies did decrease, the damage on the economy increased, as there were fewer but bigger insolvencies in 2020 compared with the previous years. Accordingly, the German statistical office announced that the expected claims connected with the insolvencies in 2020 increased by 65% compared to 2019, reaching EUR 44.1 billion in 2020, the highest level since 2009. Surprisingly, the ICT sector took the top spot, with an increase in expected claims of 2767% compared to 2019, due to a very big insolvency in the pharmacy-IT related services. Hospitality (383% YOY) and “other services” (133%, which include hairdressers and other direct-contact services) came in second and third place. The (retail-)trade-sector announced a 116% increase in claims, while sectors that were not so extremely impacted in their activity by the pandemic, like energy (-97%), transport (-84%) and construction (7%), showed better results.

There are more clouds on the horizon for 2021. While the economy should return to a sustainable recovery in the second half of the year thanks to a mature vaccination progress, higher insolvency numbers are more likely even with the very good financial situation of German companies at the beginning of the recession (better than before the previous recessions in 2002 and 2009). The current lockdown, which has been lasting for already over 5 months, is too extreme for many companies to survive. The early-announced applications for regular insolvency proceedings (Regelinsolvenzverfahren) at courts already increased sharply in February and March. Coface’s model shows that there could still be a maximum of 4030 corporate insolvencies in the pipeline, which were “hidden” in 2020 and could materialize in 2021/22. From the corporate perspective, the crisis seems far from over. 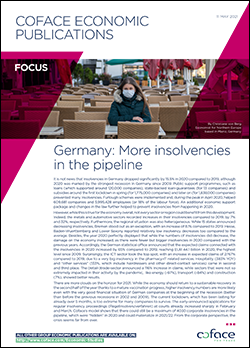