The China-Australia bilateral relationship deteriorated sharply over 2020, with China imposing both formal and informal trade restrictions on a number of Australian exports, including coal, barley, beef, wine, cotton among others. However, despite China’s trade action, the Australian economy continued a solid recovery from the pandemic, registering two consecutive quarterly GDP growth in the second half of 2020 as business conditions move towards normality following an easing of containment measures.

We expect Australia’s GDP to be back to 2019 level as soon as this year. Chinese trade restrictions so far have a muted impact on the broader Australian economy due to two main factors:

But there are growing concerns that an escalation of bilateral tensions will see China hardening its stance towards Australia and possibly start targeting Australian services exports, particularly in tourism and education which could see 2% of Australia’s GDP at risk. With both sides interpreting the dispute through the lens of national sovereignty, the situation is unlikely to improve any time soon. Future development of China-Australia tensions will be closely monitored by Asian countries for guidance as to the extent of economic damage potentially suffered should they be caught in a similar situation. 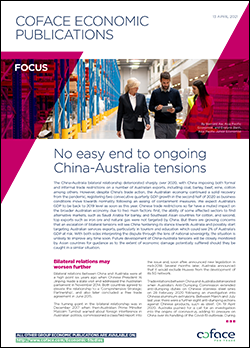 The business insolvency paradox in Europe: miracle and mirage