The Mexican automotive industry has experienced strong growth since the signing of the North American Free Trade Agreement (NAFTA) in 1993. The sector representativeness rose, from 1.5% of GDP and 8.5% of the manufacturing output in 1993, to 3% of GDP and 18% of manufacturing output in 20151. It is currently the world’s seventh-largest vehicle manufacturer and the largest in Latin America (after overtaking Brazil in 2014). However, the industry’s bright performance is not perceived positively by all. Since the beginning of his election campaign in 2016, United

States President Donald Trump has continually attacked the NAFTA. He has blamed the agreement for the deep trade defi cit that the US holds with Mexico (USD 71.1 billion in 20172) and for destroying US jobs. The automotive industry is one of his favourite targets, and not by chance: transportation and related equipment represents roughly 13.9% of total US exports to Mexico and 33.7% of total US imports from Mexico. Overall, it is the sector with the greatest trade imbalance within the United States.

Coface downgraded its assessment for the Mexican automotive industry from “medium risk” to “high risk” in December 20174, following the US Presidential Elections, in part due to the sector’s exposure to potential NAFTA changes.

NAFTA renegotiations began in August 2017, and have since been extended until at least the end of the first quarter of 2018. The agreement currently requires finished vehicles to contain 62.5% of their parts from partner nations if they are to take advantage of dutyfree imports across the continent. US negotiators wish to raise this ratio to 85%, with 50% guaranteed to US producers. The proposal has been categorically rejected by the Canadian and Mexican governments, as well as by vehicle manufacturers in each of the three countries, who argue that an 85% ratio is not feasible.

The final outcome of negotiations may be postponed to 2019, especially taking into account the electoral calendar in Mexico and in the United States this year. The main short-term consequence is on investments, which are currently on hold. Coface believes that the most likely scenario remains the one where a trade deal that largely preserves cross-border trade and investment links between the three members is reached.

Even if the NAFTA was dissolved, there are still some factors (like Mexico’s free fl oating exchange rate and the high integration between the two countries’ industries) that would cushion the negative impact on the Mexican automotive industry. Moreover, if the United States withdraws from the agreement, trade between the two countries would be governed by the World Trade Organization’s Most Favoured Nations (MFN) rules that were in force until 1994. Mexican exports to the United States would then pay, on average, an applied tariff of 3.5%, while US exports would face an average Mexican tariff of 7.1%. Mexico’s policymakers should start to look beyond the NAFTA, and should also focus on the internal issues that reduce the country’s investment attractiveness (such as weak rule of law, high corruption, and rising criminality). 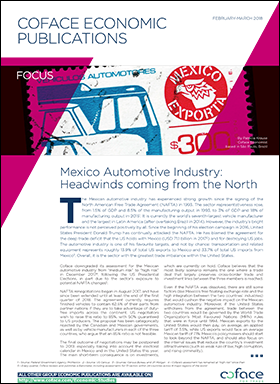