CEE company insolvencies on the rise

Insolvency trends in the Central and Eastern European (CEE) region have been subject to various economic conditions, support measures and legal changes over the last two years. Indeed, the Covid-19 pandemic that triggered the economic downturn and officially implemented lockdowns brought concerns not only for the macroeconomic activity but also the companies’ payment liquidity. In the pandemic year of 2020 growth in regional Central Europe dropped by 4% after increasing 4% in 2019. In 2020, all CEE countries recorded recessions, ranging from -8.1% in Croatia which deeply suffered from a slump of tourism proceeds taking a sizeable share of country’s GDP to a minor drop of 0.1% recorded in Lithuania. The unprecedented crisis forced governments to introduce unprecedented measures to support households and companies. In terms of the latter, it included moratoria on insolvency applications as well as various measures reducing consequences of pandemic impact on companies’ liquidity situation to save them from bankruptcy. Among other measures, those included exemptions and deferrals of taxation and social security contributions, furlough schemes, loans, subsidies and other financial assistance, guarantees, employees’ salary supplementary payments and facilitating and simplifying various administrative procedures. Although it could be seen as a paradox during such a significant crisis, business insolvencies in CEE countries dropped in 2020 thanks to the massive scale of support measures. The largest decreases were recorded by Lithuania and Latvia (by 50.3% and 34.2%, respectively) as well as Slovakia (-25.8%).

Despite the pandemic still being with us, companies adapted their business operations and activities accordingly while lockdowns have been eased in most of European countries. The regional Central Europe growth increased by 5.5% in 2021 while it is expected to lose the momentum and reach 3.2% this year. The weakest growth rates will be recorded by Baltics due to their trade links with Russia however all countries are likely to suffer from direct and indirect consequences of Russia-Ukraine war. Unwinding support measures already triggered an increase of business insolvencies in the CEE region. CEE regional GDP weighted average calculated from countries’ insolvency dynamics indicated an increase of 34.7% in 2021 compared to a prior year (+1.5% excluding Poland where the total number of proceedings soared mostly due to new procedures as explained below). Statistics in a number of countries confirm that after a drop of business insolvencies in 2020, those proceedings increased in 2021 reaching back levels close to ones recorded in the prepandemic year of 2019. Seven countries experienced a higher number of insolvencies than a year before (Bulgaria, Czechia, Hungary, Lithuania, Poland, Romania and Slovakia), and five countries recorded a decrease (Croatia, Estonia, Latvia, Serbia and Slovenia). During the course of 2021, Poland experienced nearly a doubled number of proceedings however that was strongly contributed by a surge of dedicated procedures implemented to support companies suffering from liquidity difficulties due to the pandemic. Although intended to be temporary, those measures were still in force up to late 2021 when there were implemented into Polish law permanently (see details on Poland’s insolvencies on page 12). Even despite such a surge, the insolvency rate in Poland i.e. the share total number of proceedings in the total number of active companies reached 0.06%, meaning that only 6 in 10,000 companies in Poland went through available official procedures. Much higher insolvency rates were recorded in countries where the insolvency procedures are more popular - those rates reached 1.61% in Croatia and 3.31% in Serbia. Nominal insolvency figures were particularly diverse across the CEE region, as they were not only affected by their economic situations but also by the definitions of insolvency in specific countries (with amendments to insolvency laws, or more widespread use of insolvency procedures).

As stated above, the increase of insolvency proceedings in the CEE region was expected due to governments’ intentions to unwind the massive scale of support measures. That has been already seen in business liquidity trends. For example, the latest Coface Payment Survey1 confirmed that average payment delays for Polish companies increased to 56.7 days in 2021 from 48 days in 2020. As a result, payment delays came close to the pre-pandemic level as they had reached 57.2 days in 2019. Moreover, the global economic situation led to a more challenging environment for CEE companies. The economic recovery that started in the mid-2020 was somehow faster than expected and triggered soaring demand, especially from the manufacturing sector. Prices of energy commodities, transports as well as various metals and inputs used in the production process accelerated. In a case of some of them, shortages were limiting output levels. The most evident example comes from semiconductors which along with other components shortages made a decreased number of shifts and temporary closures of vehicle plants of various automotive brands. As a result, higher energy and fuel costs amid increased prices of inputs used in the production process affected companies’ profitability. At the same time, businesses were not fully convinced if all those costs increases could be transferred to their counterparties and end clients. They could lose their market share if the same would not be followed by their competitors.

This kind of global picture has applied to CEE companies due to their inclusion in various supply chains issues, CEE economic openness and its intense trade links with Western Europe. Countries with the highest share of exports in their GDP include Slovakia (93% of exports of goods and services in GDP), Slovenia (84%), Hungary (81%), Estonia (81%), Lithuania (80%), and the Czech Republic (73%). However others focusing more on domestic demand as well have perceived global challenges affecting both foreign trade activity and domestic economies. 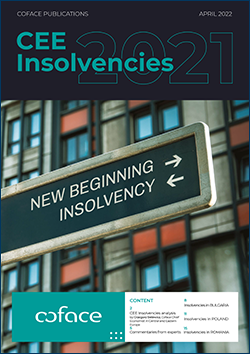 Download this publication : CEE company insolvencies on the rise (337.76 kB)