In the COVID-19 aftermath, Latin American exports towards China should continue to gain ground at the United States' expense

The trade relationship between China and Latin America has expanded considerably over the past two decades, gradually standing out (compared to the U.S.) as an important market for the region’s exports. The reasons behind this sustained trend range from the difference in growth rates observed in the world’s two largest economies to the trade policies implemented by the U.S. and Chinese governments in recent years. To analyse the trade relations with these two countries, this paper focuses on the trade in goods of the six largest economies in the region (excl. Mexico): Argentina, Brazil, Chile, Colombia, Ecuador and Peru. Indeed, Mexico was not included, as it historically has tight trade relations with the U.S., supported by their geographic proximity and the NAFTA trade agreement, which came into force in 1994 and was ultimately replaced by the USMCA in July 2020. That said, considering the six abovementioned countries, China overtook the U.S. in 2010 as the top destination for the group’s exports. However, in terms of diversification, the composition of the export basket to both China and the U.S. is poor, as it is highly dependent on commodities (albeit relatively less so in the case of sales to the U.S.). In 2020, as the global economy was hit hard by the COVID-19 crisis, foreign sales - considering all six economies - fell by 8% year-on-year (YoY). In contrast, their exports to China expanded (+4% YoY), further increasing its significance as their main export destination.

Looking ahead, Latin American countries’ foreign sales growth rates are expected to exceed their domestic demand expansion. This is because the region's activity rebound should be lower than the global average, and more specifically than the Chinese and U.S. recoveries. Therefore, sales to China and the U.S. should post a bright performance in 2021. In terms of significance for Latin American exports, China should continue to gain ground over the U.S. Although President Joe Biden’s inauguration in January 2021 has reduced the trade war rhetoric observed during his predecessor’s administration, improving trade ties with Latin America is unlikely to be among his top priorities. Moreover, exports to China are more dependent on commodities, which bodes well in the context of strong commodity prices. Finally, the shift to a cleaner economic model is likely to play an important role in the U.S. and China in the coming years, implying higher demand for some metals, such as copper coming from Chile and Peru, favouring Latin American exports. 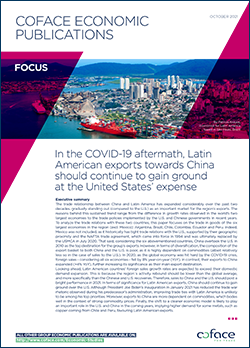 Download this publication : In the COVID-19 aftermath, Latin American exports towards China should... (2.16 MB)


Has the global retail sector returned to normal?