COFACE REPORT ON BANKRUPTCIES IN SERBIA IN 2012

Blocked accounts, frequent bankruptcies, and even bankruptcies among domestic companies are the result of the unrealistic expansion of business before the crisis.

Businessmen put companies into blockade and bankruptcy for three reasons.

SERBIA has 11,000 registered construction companies, of which some 2,500 exist only on paper, while the remaining 80 percent of the companies are insolvent and threatened with bankruptcy
Building materials will rise in price during this year (2013) by about 20% - the reason are the announced higher costs for energy and mining rents, which ultimately means higher costs for taxes. Manufacturers of building materials have had a problem  for some time with selling their products, in both domestic and foreign markets, and it is expected that half of now "live" factories will put a lock on their doors by the end of the year. Consequently, around 5,000 workers will have lost their jobs.

Recently, manufacturers and wholesalers have increasingly been disappearing from the pharmaceutical market. The first to bankrupt was "Srbolek" with a debt of 50 million euros (the only nitroglycerin manufacturer in Serbia).The same fate recently befell "Habitfarm" (cytostatics manufacturer), and the question is what will happen with "Jugoremedija" where workers are continuously on strike. After the crisis, "Galenika" has been recovering, but the future of this factory largely depends on the loan of 70 million euros, which is awaiting government guarantees.
Among the top seven wholesalers, "Unihemkom", "Vetprom chemicals", "Velefarm" and "Vetfarm“ do not exist anymore, and it shows that supermarkets can not stand the payment defaults by public hospitals, health centers and pharmacies.

The trade sector, which employs the largest number of people in the Serbian economy, which has the situation in all other industries depending on it, and also indirectly the purchasing power and standard of living, saw a large drop in the number of employees and annual turnover.

At the end of 2012, the Register of Economic Entities had 5686 companies in liquidation registered and 2647 in bankruptcy proceedings.

Broken down by sectors, in 2012, as in previous years, in the newly established economic entities there prevailed trade, hospitality and support services (taxis, beauty and hairdressing services and computer programming).

The increase in the number of companies deleted in 2010 and 2011, when the record number of 13,581 companies deleted was noted, was mainly influenced by the application of automatic bankruptcy, which was suspended last year because those provisions of the Bankruptcy Act were declared unconstitutional, the statement said.

Nearly 60,000 companies and stores have blocked accounts due to RSD147.4 billion of debt, without accrued interest. That is a fifth of all officially registered businesses. 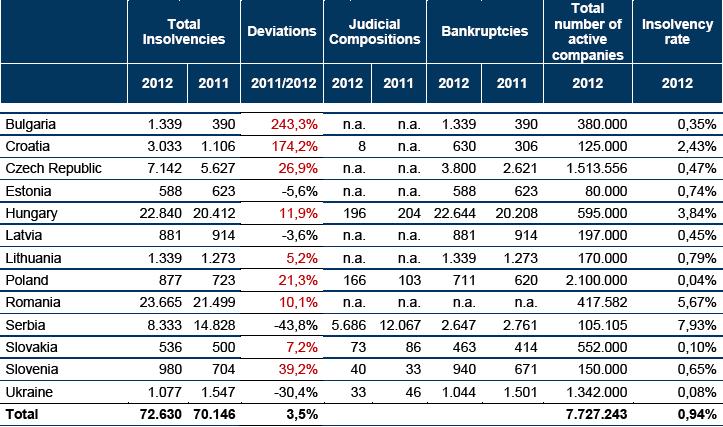