A cold chill on the global economy - Q3 2022 Barometer

Beyond the repercussions of the war in Ukraine, the global monetary tightening and the multiple constraints on Chinese growth paint a gloomy outlook. In the short term, the economy seems to be settling into a regime of "stagflation", where almost no growth and rapidly rising prices coexist.

The possibility of a global recession, meanwhile, is becoming clearer.

In this context, Coface is making general downward revisions to its GDP growth forecasts and its country and sectoral assessments.

Eight countries, including Italy, Denmark, Switzerland, Egypt, and Chile, have had their assessment revised downwards after the 19 downgrades in the 2nd quarter.

The 49 downgrades of sectoral assessments highlight the clear deterioration of conditions in sectors sensitive to the economic cycle such as construction, metals and wood, in a variety of geographies.

Winter and recession looming in Europe

Most of the risks mentioned in our previous publications have materialised: the energy crisis in Europe, persistent inflation, and aggressive monetary tightening. This has led Coface to revise down significantly its world growth forecasts for 2023: it should be below 2% as in 2001, 2008, 2009 and 2020.

While the growth forecasts have been revised downwards for all regions worldwide, Europe is the one whose outlook has darkened the most with a recession that seems inevitable in all the main economies this winter. Indeed, the energy crisis is intensifying and the old continent is preparing for "imposed" sobriety. Whether it takes the form of a "voluntary" reduction (suspension of activities that have become unprofitable because of energy costs) or rationing decreed by governments, the drop in energy consumption will necessarily translate into lower production and a decline in GDP. The extent of the decline will depend largely on the severity of the winter, and Germany, the continent's leading industrial power, will be at the forefront.

Consequently, the majority of our country risk assessment downgrades this quarter again concern European economies. Coface is proceeding with 6 additional downgrades, notably for 3 countries where the risk was still considered very low: Denmark, Switzerland, and Luxembourg. Only Norway, a gas producer, remains in a position to enjoy the best risk assessment.

Faced with the prospect of persistently high global energy prices, almost half of the 49 downgrades of sectoral assessments concern energy-intensive industries such as chemicals, paper and metals. However, unlike the previous quarter, when most of these downgrades were in Europe, this time we also downgraded these sectors in most Asian economies and, for example, also in South Africa.

Central banks step up the fight against persistent inflation

Recent months have confirmed the materialisation of persistently high and increasingly widespread inflation in advanced and emerging economies.

In this environment, the main central banks remain resolutely aggressive and most of them have returned to key interest rate levels unseen in the last decade. The Fed, for example, raised its key rate 3 times in a row by 75 basis points this summer. This aggressiveness is leading to increased monetary tightening in other countries - particularly emerging countries - in order to halt the depreciation of their currencies against the USD.

Such a tightening of monetary and financial conditions, should it continue at the current pace, would obviously threaten global growth and financial stability.

Three emerging central banks are continuing to pursue counter-current monetary policies: Russia, Turkey and China. The Chinese monetary authorities have lowered some benchmark interest rates in order to support activity in response to the confirmation of a sharp slowdown in the economy. It continues to be affected by the zero-COVID strategy, the severe drought this summer and the crisis in the property sector.  In particular, the woes of the property sector, which is estimated to account for 30% of GDP, will contribute to China's growth falling well below the standards of the last decades in 2022 (3.2%) and 2023 (4.0%), contributing to the sharp overall slowdown.

Widespread monetary tightening clearly darkens the outlook for the global construction sector. Industrial metals and timber prices have fallen steadily in recent months, and are down by 20% and 60% respectively since the beginning of the year, leading Coface to downgrade these sectors in several geographical areas.

While central banks are determined to fight inflation with "whatever it takes", many are faced with a conflict of objectives with the fiscal policy of their country/region. National governments, fighting against the contraction of activity, have indeed multiplied measures to support household purchasing power and corporate cash flow. The outcome will be a potentially explosive cocktail for public finances: a widening public deficit and soaring financing costs. 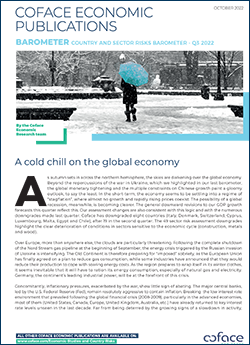 
Publication: A cold chill on the global economy - Barometer Q3 2022